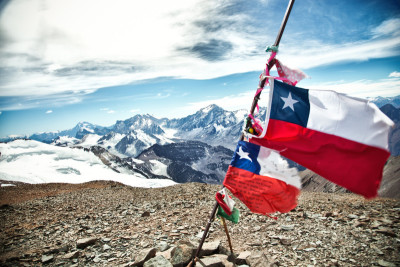 Copper Versus Ice: Chilean Mine Would Excavate Five Glaciers

The glaciers of Chile are threatened not just by global warming, but by mining operations high in the snow-peaked Andes cordillera. On July 24, Chile’s state-owned copper mining company Codelco, the world’s largest producer of the metal, proposed changes to a controversial $6.8 billion expansion of its Andina mine. Whether the new proposal gets the green light from environmental authorities could determine the fate of 26 glaciers in the central Andes.

There are few sights in nature as impressive as a fiery volcanic eruption. GlacierHub has featured many photos and stories from Iceland’s recent volcanic eruptions, and another useful way of understanding some of the more intangible aspects of volcanoes is through data visualization. One of the hot spots (if you’ll excuse the pun) in Iceland […]

Glacier stories you may have missed this week – 9/29

Nepal tourism adapts to climate change “Weather can ruin the vacation while climate can devastate a holiday destination. Climate change not only impacts on tourism directly by changes in temperature, extreme weather events and other climatic factors, but it will also transform the natural environment that attracts tourists. Despite the global nature of tourism industry […]

Last weekend, ahead of the United Nations Climate Summit, three hundred thousand people gathered on New York City streets in solidarity with similar marches across the globe in order to send a clear message to policy makers around the world that people are invested in their environment, and they are paying attention to what their governments […]

When attacking a problem as complex and diverse as climate change, sometimes the best way is from the ground up. Bringing indigenous communities, including those near glacier in high mountain regions, into the discussion is the new tactic discussed at a September 24 meeting at the United Nations Development Programme in New York during Climate […]

In the Himalayas, when a flash flood rips through a village or when a glacial lake flood outburst wipes one out entirely, surviving families relocate to new settlements, where women are often burdened with more labor and kept away from school, or sent off to an early marriage. Climate impacts have made gender and ethnic […]

How to make a glacier in 10 easy steps

We made a model glacier that we brought to the People’s Climate March in New York on September 21. It was easy. We invite others to make model glaciers too. If you discover any improvements on our system, please let us know. 1. Find some friends. It’s more fun if you work with others. 2. […]

Tibetan glaciers have shrunk by 15 percent “The study attributes the retreat of glaciers and thawing of frozen earth to global warming, suggesting a significant impact on the water security of the subcontinent. Rivers such as the Brahmaputra have their source on the Tibetan plateau, where it flows as the Yarlung Zangbo before turning at […]

Photo Friday: A Song of Ice and Fire

We’ve brought you plenty of posts and updates on the earthquakes and eruptions in Iceland over the past few weeks. The Iceland’s Institute of Earth Science recently published even more photos of researchers surveying Bárðarbunga from the air and from the ground from a variety of photographers. We’ve selected some of our favorites, but see the […]

Is a new Fern Gully in the making on a sub-Antarctic island?

An unusual form of life was recently discovered on a glacier located on a remote island in the Southern Ocean. Signy Island is part of the sub-Antarctic South Orkney Islands, about 600 kilometers northeast of  the Antarctic Peninsula and 900 km southeast of Tierra del Fuego. The site of a former whaling station and the […]

Take a selfie with a glacier on Sunday

Two teachers are preparing a model glacier, which they will bring to a major climate demonstration this weekend to illustrate the importance of glacier retreat as a climate change issue. The People’s Climate March will be held on Sunday 21 September. This large event comes just before the opening of the 2014-15 session of the […]

In wake of Everest deaths, many groups push for reform

A major workshop late last month represents a significant change in the debates about climbing expeditions on Mount Everest, with significance across the Himalayas and beyond. The “Participatory Workshop on Roles, Responsibilities & Rights of Mountaineering Workers,” held on 29 and 30 August in Kathmandu, emerged from the unsettled outcome of the tragic accident of […]